Tickets for the game in London are sold out but Fans can search for resale tickets on Stubhub.co.uk also NBA have teamed up with ODEON Cinema to show the game live across the UK in 31 participating locations.

“Live entertainment is hugely popular with our guests and growing rapidly, whether it be theatre, music or sport, and the NBA is a fantastic addition to our line-up. Like our guests, we’re thrilled that the adrenaline of the games and the atmosphere of the crowds will be beaming onto our screens around the UK to guests who are enjoying the comfort and hospitality of our cinemas.”

Along with the on court action, NBA Global Games London will feature a variety of off-the-court activities, including NBA Cares community programs and interactive fan events.

To prebook tickets at your local ODEON cinema and for more information, please visit: www.ODEON.co.uk/films/NBA_Live_ODEON/16203/

Great Britain small forward Luol Deng has been traded to the Cleveland Cavaliers from the Chicago Bulls.

As part of the deal, the Bulls acquire centre Andrew Bynum and three of the Cavaliers’ future draft picks.

“Luol is a tremendous defensive player that can impact the game at both ends of the court,” said Cavaliers general manager Chris Grant.

Deng, 28, an NBA All-Star in each of the last two seasons, ends a nine-year career with the Bulls.

He has started all 23 games this season, averaging a career-best 19 points.

The Brit was was named to the NBA All-Defensive Second Team in 2012 and also received the NBA Sportsmanship Award in 2007 and the All-Rookie First Team honours in 2005.

Small forwards are generally renowned for their scoring and defensive capabilities.

The glitz and glamour of the NBA will return to London in January next week when the Brooklyn Nets take on the Atlanta Hawks in a regular-season match at the O2 Arena.

Both teams are still in the play-off hunt in a weakened Eastern Conference and will see this trip to the Capital – where they will play just once in a four-day trip – as a welcome break from the toils of their rigorous 82-game season.

Casual British fans could be forgiven for thinking they know the Nets team. The franchise played a pre-season game in London in 2008 and took part in the first two regular season games, along with the Toronto Raptors, in 2011.

But much has changed since then, as new billionaire owner Mikhail Prokhorov has sought to turn the team into a title contender. Prokhorov moved the team from New Jersey to a new $1billion home in Brooklyn and, with the help of Jay-Z, created the Brooklyn Nets.

Entering this season the Nets were supposed to be one of the NBA’s best. They had captured two of the biggest names in the game, Paul Pierce and Kevin Garnett from Boston, to create a starting line-up comprised of five stellar names.

Pierce and Garnett were meant to add the defensive skills and toughness that would compliment the attacking flair of Deron Williams, Joe Johnson and Brook Lopez, as well as showing off their own veteran talents.

Trading for the two veterans made Prokhorov’s team the most expensive in the NBA by some margin.

Their total salaries add up to $101million this season, $14m more than near-neighbours the New York Knicks who are second in the most-expensive list.

All that money meant the Nets were expected to win right away, but that didn’t happen.

Prokhorov took the surprising step of naming Jason Kidd, who only finished his Hall of Fame playing career in the summer, as head coach, and it’s fair to say the 40-year-old struggled initially.

On paper the Nets were the second or third strongest team in the East behind the Miami Heat, but slumped as numerous players missed game time through injury.

There was further misery when Brook Lopez, who had been their best offensive player this season, was ruled out for the rest of the season through injury after playing just 17 games.

At one point the Nets, a team expected to walk into the play-offs in a conference that currently boasts just three teams with winning records, had won just 10 of 31 matches.

‘I don’t know, honestly,’ said guard Alan Anderson on his team’s poor start. ‘It’s a surprise to a lot of us, with the ammunition we have on this team. We’re going to fight through it.’

‘It’s been great, I’ve got a good group of guys, a veteran group. It’s been exciting, they’ve helped me in a big way of making this transition easy,’ he said.

Senior members of his roster, such as Paul Pierce and Kevin Garnett, have spent a number of years playing opposite the two-time Olympic gold medal winner. Garnett is known as one of the league’s greatest competitors and trash-talkers, but Kidd says his previous relationship with those players hasn’t changed.

‘No, no, no, [Garnett’s] a competitor, playing against him for a lot of years I know he comes with being competitive and wants to win, and now being a coach I’m just trying to put him in a position to be successful, that’s all that matters.’

And the big change in recent days for Brooklyn?

‘Health has been a big part, that’s been something we’ve been dealing with all year, now we’re healthy we’re starting to get some wins and guys are playing well together. It’s a good time now to go to London and showcase our talents.’

Kidd was part of the New York Knicks team who beat the Detroit Pistons at The O2 Arena in London last year. He is looking forward to returning to the city, but says he doesn’t mind that he’s doing it as a coach and not a player. 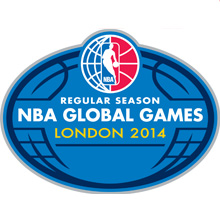 As part of England Basketball’s continuing partnership with the National Basketball Association we are pleased to host another NBA Global Games coaching clinic on Tuesday 14 January.
The clinic will run from 6pm until 8pm and will take place at the Ethos Sports Center – Imperial College London, 7 Princess Gardens, South Kensington Campus, London, South London, SW7 2AZ.
The deliverers have been confirmed as Taylor Jenkins from the Atlanta Hawks along with Eric Hughes and Joe Prunty of the Brooklyn Nets. The coaches will be putting on the clinics utilising on-floor demonstrations; providing a not-to-be-missed personal development opportunity for coaches and teachers at all levels of the game and a great opportunity to learn from GB Men’s coach Joe Prunty.
The on-court clinics will take an in-depth look at particular topics with coaches then open to questions from those in attendance.
This is another fantastic opportunity for coaches across England and the UK to learn and support their own coaching development.
Brian Aldred, Coach Development Manager commented, “We are delighted that the NBA are able to provide England Basketball’s coaches access to quality coaching from high level coaches and encourage our own coaches to develop their learning and practice. We want all our coaches to be able to produce great players as part of the British player pathway.”
“We are looking forward to working with England Basketball as these clinics are a great way to grow the game and afford the perfect opportunity to utilize our NBA coaches to develop coaches here in the UK” said Neal Meyer, Senior Director of Basketball Operations, NBA Europe.
Coaches wishing to attend this free event must Email coaching@englandbasketball.co.uk to confirm your place at this unique opportunity. Confirmation and further details will be Emailed to those coaches that register.
Tweet

Luol Deng & Pops Mensah-Bonsu give back in Ghana

Luol Deng and Pops Mensah-Bonsu headed up NBA Africa basketball camps (sponsored by Sprite) held at the Labone High School in Accra and 2 other cities in Ghana (Kumasi and Cape Coast). More than 40 boys between ages 15-19 participated in basketball drills and scrimmages by Lawal Brimah, head coach of the Ghana national team. Practicing cross-over, defensive stance and shooting techniques, the young players had an opportunity to learn from Luol and Pops and engage with them on the court. The clinic concluded with the All-Star Game between the top 11 players.

Great Britain forward Pops Mensah-Bonsu, who is of Ghanaian descent, could not hide his excitement with the level of play he saw.

“Some of the kids I saw today could one day play in the NBA,” he said. “All they need is resources. If we have the infrastructure, the funding and the backing, the future will be bright for basketball in Ghana, I see a younger me in these kids out there.”

Prior to the Sprite Ball clinic, the NBA delegation met with Ambassador Dr. Erieka Bennett, who is the Convening Founder and Head of Mission of the African Diaspora Forum that links Diaspora Africans and their talents to the development of Africa. Ambassador Bennett was also a guest at the reception hosted by the Ghana Basketball Association in the evening.

“The NBA is here and the conversation has begun” said Ambassador Bennett. “Thank you for what you have been doing, what you have done and what you will be doing, and I will be watching.”

For Luol Deng, this year’s African trip is simply a continuation of a journey that started three years ago.

“I’ve been very fortunate, very blessed, whatever you want to call it,” Deng said. “I realize that I won’t be playing forever. I want to do whatever I can to help kids out here.”

The South Sudanese forward for the Chicago Bulls also traveled to Angola where he joined Congolese Serge Ibaka of the Oklahoma City Thunder at the NBA Sprite Development Camp.

Basketball fans waking up in Spain and France on Monday morning were greeted with contrasting images and reflections of what had happened in Orchies, France an evening earlier.

In what was supposed to be France’s night on home soil – a relatively unheralded Spanish team turned the French party into a Spanish Fiesta, defeating the hosts 70-69 in the gold medal game.

The gold medal came as something of a surprise for the Spanish, whilst anything but gold was always going to be digested as something of a disappointment for the heavily favoured French – views that were reflected in newspapers across both countries.

In Spain, MundoDeportivo lauded the tournament as the perfect championship with the perfect end, alluding to the fact that the Spaniards went unbeaten through the course of the tournament. The story also made mention of the fact that only one other country in history, the former Soviet Union, has held both the men’s and women’s EuroBasket trophies concurrently, adding, “let’s see what happens in September at EuroBasket.”

In addition, the article made mention of the fact that Laura Gil has now achieved a feat that no other Spanish player has managed by winning European gold at U16, U18, U20 and now senior level.

Marca ran the headline: “Spain Make Possible The Dream Of Amaya [Valdemoro] and Elisa [Aguilar],” who both retired after bringing gold back to Spain for the first time in 20 years.