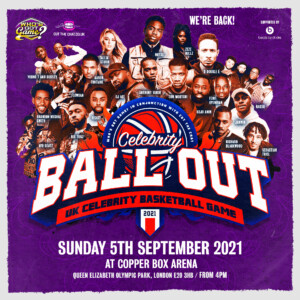 Who’s Got Game in conjunction with Cut the Chat today announces its 4th annual official Celebrity Classic basketball match taking place on Sunday 5th September 2021 at The Copper Box Arena at the Olympic Park in London, supported by Beats by Dre.

Much more than just a basketball match, this cultural event brings together the influence and power of home-grown and International celebrities and athletes, along with the strength and character of the local community to raise money for our charity partners.

The Event is taking place at Illustrious Olympic Park at the Copper Box Arena, doors open at 1pm the event will feature live music powered by Beats by Dre, a slam dunk showdown, silent auction, audience giveaways and a half-time performance by a special celebrity guest!

All sales are final, no refunds.