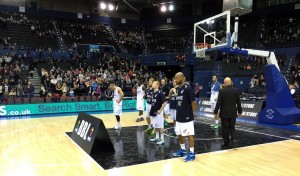 Newcastle Eagles and Leicester Riders will face off in this January in a mouthwatering clash for the coveted British Basketball League (BBL) Cup silverware.

The Eagles will go in to the game as favourites, following on from last season’s clean sweep of honours with an unbeaten start to the season. With a team boasting Fab Flournoy, the most successful coach in BBL History, last season’s Most Valuable Player Charles Smith along with star guards Rahmon Fletcher and Joe Chapman, it is clear why they carry the favourites badge.

The Riders however have also enjoyed a fantastic start to the season, picking up only one defeat so far and they will feel confident of repeating their 2014 Cup Final success against an Eagles team boasting many of the same players they faced that day. Back in 2014 the Riders were inspired by GB Captain Drew Sullivan, and they will be delighted to draw on his services again as he goes up against his old team. Add in to the mix flamboyant Head Coach Rob Paternostro, exciting big man TrayVonn Wright and young British stars Jamell Anderson and Conner Washington and you have a team capable of beating the Eagles to the title.

Be there as the teams lock horns for the third time in recent Cup Final history as they go head-to-head on Sunday 17th January at the Barclaycard Arena, Birmingham (formerly the National Indoor Arena) for the first piece of silverware of the season.

Also taking place on the day is the Women’s British Basketball League (WBBL) Trophy Final (12pm) which pits two of the top UK Women’s teams against each other in a winner takes all encounter.

But the entertainment doesn’t stop there with our full supporting cast featuring:

The BBL Slam Dunk Contest (2pm) featuring some of the finest dunkers from around the world! Check out footage of the latest two confirmed participants, Canadian’s Justin ‘Fly’ Darlington & Jordan Kilganon
Britain’s Got Talent finalists dance street group Flawless
BBL Dancers cheerleaders, dunking mascots and much much more
Be a part of it – don’t miss one of the biggest events in British basketball, book your tickets today and get ‘closer to the action’.

The British Basketball League is to launch its own league pass for video coverage of games but executives say they are still in the market for a broadcast deal.

It is widely expected that the BBL will remain with Sky Sports with a similar package to last season but plans have been unveiled for a subscription-based service which will see 30 games per season shown live online in HD.

It is to cost £29.99 with Glasgow Rocks meeting with Surrey Heat on October 6 selected for the opening tie, hosted by Dan Routledge.

But it is likely to see more games available if a TV contract is also secured.

“It’s not a replacement,” claimed BBL commercial director David Leyden-Dunbar. “It’s perfectly complementary. We believe there’s more of a demand for extra live content than we currently have. So this is a way of giving fans more of what they want.

“We’ve put together the most competitive pricing we could. But the success of it will rest with the fans and whether they get behind it. We have 214 games per season. Even with what we do with Sky Sports or another broadcaster, that’s still just scratching the surface.”

The league expects to unveiled additional sponsors ahead of the new campaign but will not be re-branding the BBL which has been without a name title since the exit of Dairylea over a decade ago.

“It won’t be a title sponsor,” added Leyden-Dunbar. “That’s not in our strategy. We’re looking for a roster of sponsors.”

The summer season at the Copper Box Arena will get off to a “slam, dunk” start with the UK’s premier basketball team, the London Lions, announcing an International match against leading US college side Iowa University on 14th August 2013.
This is the first time since the 2012 Olympic Games that two club teams will play at the Queen Elizabeth Olympic Park, and one of the first major sports event to be held at the Copper Box Arena after it re-opens under the management of charitable social enterprise GLL on 27th July 2013.
The Iowa team is one of the top college sides in the US. Players such as Aaron White, Eric May and Roy Devyn Marble are household names in their native country, typically playing to crowds of 15,400 at their home venue, the Carver-Hawkeye Arena. One Iowa squad member – Gabriel Olaseni – is a native Londoner and the August match will be an opportunity for Gabriel to play in front of friends and family.
The 7,000-seat Copper Box Arena was known as the “box that rocks” during the London Olympics and looks set to become one of the leading indoor sporting venues in the country. It is now the home base for the London Lions, who are the first legacy team to take residence on the Queen Elizabeth Olympic Park. This means that Londoners will have many seasons of top class national and international basketball matches taking place on their doorstep.
Lions coach Vince Macaulay said: “We are delighted to have such a respected University as our first opponents at the Copper Box Arena, this is a storied programme that has produced terrific players for the NBA, it’s just the kind of test we need to get the ball rolling for what promises to be an exciting time for Lions basketball but also for GB basketball.”
“We believe that through increasing awareness of and participation in the sport, we can work to ensure that basketball becomes one of the catalysts to get Londoners more active; so cementing a true Olympic legacy.”
Dennis Hone, Chief Executive at the London Legacy Development Corporation added: “The Copper Box Arena will once again be the “box that rocks” this summer as the London Lions start their season playing one of America’s top university teams. Last year we saw what a great atmosphere this venue can produce, it will be a fantastic place to watch London’s only professional basketball team shoot some hoops. The game against Iowa is a really exciting way to get the season started and a great opportunity for people to come and experience sport back on the Park this summer. Queen Elizabeth Olympic Park is opening in phases, starting with the Copper Box and parts of the north Park. We are on track to deliver a fantastic new destination and a lasting legacy for east London and are looking forward to the full opening of the Park in the spring next year.”
The Copper Box Arena in Hackney Wick is the first of the permanent legacy venues to open on Queen Elizabeth Olympic Park (27th July 2013).
Ticket prices for the London Lions vs Iowa University match range from £9 to £42. Tickets are available now from www.ticketmaster.com. Season tickets to the London Lions matches at the Copper Box Arena are also available with prices starting at £110.